Well the day didn't start well. There has to be one doesn't there. One what, you ask? One idiot who didn't realise the clocks went forward!!! Got in the car with plenty of time to spare - or so I thought, at 8:20. Set in the coordinates to the gps and it very politely informed that it had adjusted the clock for daylight saving - how kind. OH MY GOD!!! It's now 9:20, the race car park is a mile from the start and the race starts at 10:30 in Cleevehill near Cheltenham, 55 miles away. Suffice to say I made it with about three minutes to spare but I had to run that mile from the car park fairly rapidly to do so. It didn't bode well for the race.

My legs felt OK before the race, not too stiff, and the blisters were under control as well. I wore my road shoes which meant I was in for a bit of slipping around during the race but even that wasn't too bad and could have been far worse.

So how did the race go? Pretty good until the 12 mile point. I was in about 16th place (by my estimation) and going well. I'd worked my way through the field, steadily gaining places as the race progressed. At 12 miles I suddenly hit the 'wall' in a fashion most people can only dream of. I was quite literally out on my feet. I had to walk at least half of the final 2 miles and was on the point collapse. I was physically exhausted and even when I tried to run it really wasn't much faster than walking. I'm guessing I didn't manage to get enough fuel into the system after yesterday's race because a 14 miler should be no problem for me under normal circumstances. I lost somewhere in the region of twenty places in those last two miles dropping down to finish 37th in a time of 2:01.

The walk back to car park was not pleasant. I was shivering and in physical distress but I made it, got some food down, and recovered pretty quick. I'm glad I did the race though, even with all the suffering. As I say, 'what doesn't kill you makes you stronger' - although I took it pretty close today - but I expect to come back even stronger.

With race 19 under my belt I am on target to make the magic 20 by the end of March - nice. I must admit now though, I'm pretty much physically wrecked. My legs feel sore - they'll be doubly so tomorrow - and my feet are painful as hell. The soles of both feet feel mega bruised. I don't think I will be doing much training in the coming week!

Thought for the day: If it wasn't for the last minute, nothing would get done. 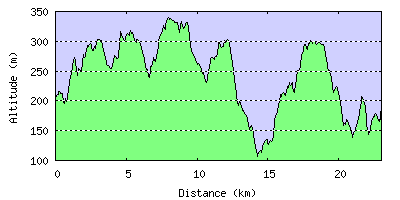 is that 2 schoolboy errors this weekend? - firstly not to suss out the finish and secondly not to change the clock.
An old runner's saying: the car doesn't go if there's no fuel in the tank.
Well done for completing the race today, although I would not have expected anything less.
Not seen the cap-cam from yesterday yet, but from the comments you're getting a growing band of followers.
We had a small select band this morning; Heidi and I ran with Mike, a new-comer who was a self confessed fan of your blog - well, he'd read it once or twice.
Perhaps light sessions this week - see you Wednesday, Rick

Cheers Rick,
PS I got another shout out on the way round today!