Well I managed to get around the course unscathed but it was quite tough. The 'undulating' was, according to the gps (and corroborated by my digital mapping software), in fact 3000ft of ascent.

So how did I do? Well, I took it out steady. From asking around before the start, I found out that the major climb started between miles 3 and 4 and went on until around mile 6. I decided before the race that I would split the climb into four or five sections with a little spot of walking to try and save myself for the later miles. This turned out to be a reasonable tactic. In addition to the steep climb the wind just happened to be right in your face on the way up. Don't get me wrong, conditions were pretty much perfect - nice sunshine and not too hot or too cold - I'm guessing you always get the strong winds like we had to day.

Anyway, once I got to the top it was just a case of knuckling down and getting on with it. I was aiming to finish in a time somewhere between 2:30 and 2:40. I didn't want to kill myself since I have my other race tomorrow - the Ironwood Challenge (8M). I got a good rhythm going and felt comfortable. I really didn't want to race it today, I just wanted to complete the course and get race 16 out of the way.

Unfortunately, I completely ripped up the game plan at around 7 miles! As I ran past the first of the lakes I caught a glimpse of my arch nemesis of recent weeks - Stroud's Phil M - just ahead. We've met in quite a few races this year, the Mayhill Massacre, The Cirencester Duathlon and the Hogweed Hilly Half to name but a few, and I haven't managed to beat him yet (usually he's about a minute ahead). In our last meeting, the Hogweed, he ran me out of the prizes in the last few miles, grrrrrr.

I could see I was gaining on him which caused the fog of war to come upon me. By mile nine I was past and clear. I soooo didn't want him to come back past later in the race that I really piled it on to make sure. For a few miles I hit sub half marathon pace! The last two miles were hard going though. I really felt the lack of training miles but hung on in there to finish in a time of 2:22:24. I gained loads of places throughout the race and recon I made the top thirty (out of 300+). I also had a good negative split of 1:14:50 / 1:07:34

By my estimate I recon I had a good nine minutes on Phil at the end. I think that settles the score - for now.

So how do my legs feel now? Not too bad actually. I think they might be a bit stiff in the morning but I shall run the Ironwood regardless. I just hope Phil isn't there because I really do want to take it easy!

Thought for the day: You need only two tools, WD-40 and duct tape. If it doesn't move and it should, use WD-40. If it moves and shouldn't, use the tape. 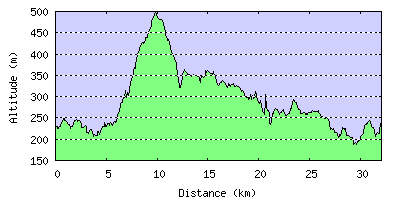 PS I managed to film the race but as it was a long travel (200 mile round trip) I might not manage to get it edited up until Monday or Tuesday. I will try my best as I know you're all dying to see it - NOT.
Email ThisBlogThis!Share to TwitterShare to FacebookShare to Pinterest
at 3/17/2007 06:57:00 pm