Yes, I need to book myself in for some after three separate unintentional sheep worrying episodes - well I was in Wales! Those sheep are annoying. I was running along quite merrily - no, that sounds a bit gay - I was running soundly when two sheep popped out of the undergrowth a few metres ahead and preceded to run along the path I was following. We ran together for a bit but they just kept going. Animals are so stupid, left or right and the worrying would have ceased but oh, no, not these sheep - straight on down the track. I stopped a few times and tried to walk slowly as possible but they just kept heading on. I ended up guiding them into the trees before they eventually they hit upon the idea of TURNING OFF THE BLOODY PATH - yeh, five minutes earlier would have been a good idea to come up with that one Einstein

Anyway, I had a great run today. The weather started off overcast but within half an hour it was bright sunshine - couldn't have asked for more. The run turned out to be 26.5k - that's about 16.5 miles in old money - and around 3,000ft of ascent. I know I said I wasn't planning any of the peaks but late on I decided to go off plan and up Tor-y-foel at the end of the run - you can't go to the mountains and not run up one - it'd be rude.

There was another couple of sheep worrying incidents with the worst one being me chasing these two sheep, that had obviously escaped from a field, down a track. I was concerned I was about to herd them onto the road and in the end I had to climb into a field to go around them before re-appearing down stream and chasing the pesky devils back a ways - the things you do. Hence the need for me to get some electric shock aversion therapy.

And one more thing, why oh why oh why do some people think it's a good idea to fly-tip? Not just that, these fly-tippers were hard-core - we're talking extreme fly-tipping. These scum - yes, scum - go onto the mountains just do dump a load waste. There was a section of the run, about a kilometre long where there was just tons of dumped rubbish - it really p#@$ed me off and got me in a bad mood. But once I was clear of that I calmed down again - oh, I was so angry - I could have burst a blood vessel. Some people - don't deserve to live. Rant over.

Thought for the day: Rest satisfied with doing well and leave others to talk of you as they will. 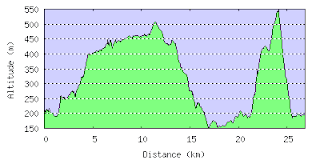