but never the less, it was fun. With the Dozen, taking place tomorrow - that's Dursley, to you, we went for a walk - and slide - on Gloucestershires answer to the slopes of Val d'Isere - May Hill.

As we trundled on the increasingly icy roads, heading further from the main road arteries we came slightly unstuck. With the top in sight and mere metres to go, the Son of The Beast just couldn't cope with the final steep climb and we slid around on the icy surface. After spending several minutes trying to ascend the glacial flow we finally admitted defeat and slid back down the road, turned it around and found somewhere on the low lands to park up.

Then we released the hounds and walked back up to the top with said, whiny, faker and the super dog in tow, chasing around in the snow - although it has to be said that whiny often seems more interested in the household refuse sacks at the end of driveways.

Finally we made the top, having trudged through the snow which lay a foot deep in places. It was time to unroll the thick plastic bags and make like the GB bobsleigh team from the top of May Hill. As we launched ourselves down the steep slopes it was like being on the Cresta run. Hurtling at unbelievable speed we blew away all in our wake but after a few more hikes to the top we had seen enough and returned home. 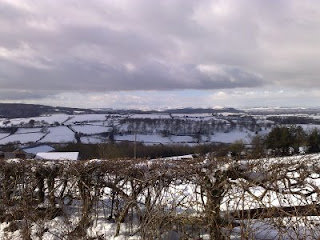 The from May Hill across to Sugar Loaf - which could be seen
with the naked eye, but alas, not the puny phone camera.
Email ThisBlogThis!Share to TwitterShare to FacebookShare to Pinterest
at 2/07/2009 03:51:00 pm