Well, the rest day didn't go quite to plan..... I took my kit to work in case Graham was heading out at lunch time for an easy one but we decided to hit the Dundry hilly run instead. Not only that, I ended up running rock solidly up the hill and then really powered along from the top. For the final two and half miles I was running a good few seconds sub 6 minute miles and the last mile and a half undulates in the upward direction. It was a cracking solid effort and I felt strong. In light of the hard week's training I've had it really was a great run. The calf muscles didn't even tighten up like they've been doing all week and as a bonus I no longer feel the tiredness I've been suffering during the last couple of days.

So how is it with me at the moment? I have to admit that over the last few weeks my enthusiasm for running has been waning. I've enjoyed my races and had some good results along the way. In fact, I guess, I've had my best few results ever but somehow it still felt like something was missing. Some of my passion for this great sport had deserted me. I've been getting out there, putting in the training, completing the sessions and generally running them as fast, if not faster, than I ever have. But somehow the fire has been lacking - until now, that is. This last week my desire has returned. The fire has been rekindled, the flame that had cooled, is once again burning hot.....

Thought for the day: Nothing is foolproof to a talented fool. 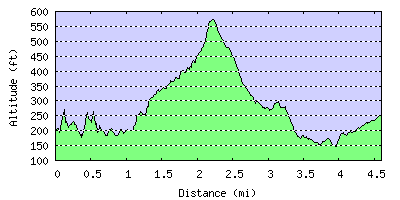 Today's run
Email ThisBlogThis!Share to TwitterShare to FacebookShare to Pinterest
at 2/23/2007 05:17:00 pm