What started out as a 21 miler with 6,000ft of ascent ended up as 27.5 miles with 10,000ft of ascent. It was more of a mountain trek than a run, taking in some extremely un-runnable paths and trails. Suffice to say I am a little bit knackered now - well, if I'm honest, I'm totally shagged but I like to be a bit dishonest and stick with the 'little bit knackered' story.

It was a cracking route though. The reason for the extra miles and two extra climbs was because my original route didn't seem to exist! I had the route programmed into the GPS but the stretch called the Strath Nethy pass just didn't seem to be there so I had no choice but to divert up to the top ridge, running parallel to the pass to begin with but obviously much much higher and heading off to the east and south, adding the extra miles and climbs. The amended route also called for two river crossings and boy is that mountain water a tad on the chilly side - just glad it was only knee deep 'cause it would surely have frozen my wotsits off!

The highlight of the amended route was passing Loch Etchachan, at a height of about 3,100ft above sea level, in the shadow of the last remaining snow (see web album below) then it was a nasty descent down to Loch Avon at a height of about 2,400ft above sea level. I'm guessing not many people get to see these Lochs as it's quite a hike to get to them. The final ascent was a killer to the route highpoint of 3,750ft, up the side of a cascading stream. It was more climbing than hiking and certainly not running. To be honest I was glad when I had that final ascent out of the way because I was running on empty (I was a naughty boy and didn't take much food and no water, ssh don't tell anyone). The final three miles where hard even though they were downhill. By the end I was just glad to get back to the car. It will be a golf day tomorrow so I can get some rest ahead of the 'Heart Of The Park Challenge', Braemar on Sunday.

I have a added a few more pictures from today's and Wednesday's outings to my Scotland Web Album which you can view here.

Thought for the day: The surprising thing about young fools is how many survive to become old fools. 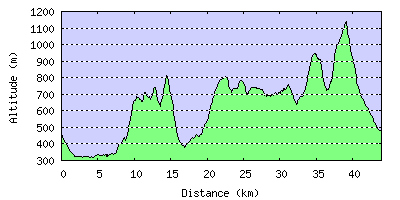 PS, good to hear there was no slacking from the boyz (thanks Nick, for the update) - I knew they'd come good.
Email ThisBlogThis!Share to TwitterShare to FacebookShare to Pinterest
at 7/13/2007 07:32:00 pm