I had a good run today in the Seaview 17 (which is actually 20 miles but extended to 21 this year on account of a land slide on the path with alternative route in place and takes in about 4,500ft of ascent).

It was hard work and certainly pretty hilly. It was just a shame I couldn't capitalise on my lead - yes, I did say lead!!!! - just after the half way point. It all came down to the old 'go the wrong way three times' routine. I suffered with cramp in the last mile and a half and got overtaken - had I not kept going wrong and having to back track I would probably have had enough of a lead to hold on but that's all part and parcel of the off road scene - you win some you lose some. Just a shame it was a day to lose some but Martin, from Nailsea, was a nice chap so I'm happy for him. We had a bit of a chat on the way round and swapped the lead a few times between us. He even offered to slow so we could cross the line together but by that time my calves had had it so I told him to push on and take it, he worked hard to get back to me so fair play. If you had said before the race I could have second I would have bitten your arm off so I have to be happy. It still makes it my best ever finish position in a long distance race - and second is still pretty good, isn't it?

Dave T turned up and ran - I have to say I was a bit worried for him because it's way longer than anything he's done of late - well, when I say late I mean years (and years) but he was smiling at the finish so I think he enjoyed it - if it is actually possible to enjoy a 21 mile slog along the coastal path that is! (There might have been another reason for him smiling but I don't know what that could be). I hope he's recovered by Tuesday for the Bridge Inn 5k - can't be using today as excuse.

Thought for the day: Why the hell do we do it? 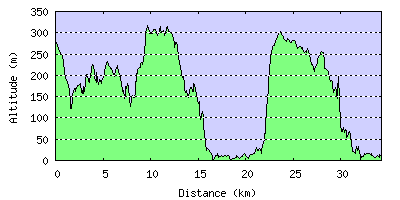