Well that all went a bit wrong. It would appear that I am a bit more pants than I thought. I took it out hard for - the first kilometer. Then the realisation struck home that I'm still firmly on the first rung of the runners rehabilitatory ladder - the next 13 kilometers were a struggle.

As the race progressed, I steadily lost places. Only briefly managing to turn the tide on the steep downhill sections where my loss of sense and sensibility allowed me to go faster than the average bear, Boo-Boo.

The finish, when it eventually came into view, was a very welcome sight. I was just outside my target of 1:35 for the 9 mile, 2,700 feet ascent fell race, making it home a minute later.

It's true to say that this wasn't my greatest moment in fell running but it was good practice all the same - and only five ladies, four oaps, three hill walkers, two turtle doves and a partridge in a pear tree managed to beat me home - so that was alright. Oh, and I made the top 254 (out of 254).

Helen took the women's race in a non-course-record time of 1:28 - whoo, not-record-breaker - although she does still hold it from last year. Mrs B got some cake and chips so she was happy and I ate 'the works' in the Little Chef on the drive home - ah, there's nothing quite like quality, home cooked food - shame we went to the Little Chef really.

Further training is required. Make it so, number one.

Thought for the day: I like long walks, especially when they are taken by people who annoy me.


Profile and Route of the Cardington Cracker 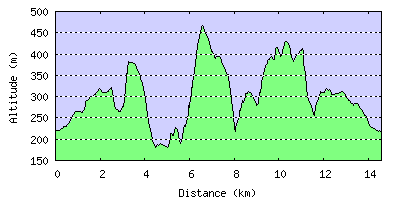 Yesterday's Gwent League combined with the Avon & Somerset XC champs saw a better performance from R. After the poor showing at Bath he ran strongly to win the county title for the older men. There were no-shows from Jerry (unless I just didn't see him behind me in the race) and Sean (cold, sore throat, tense nervous headache....).
This morning Sean and I were joined by Suzie R (no relation to Suzie Q) for an hour's steady run.
No session on the Downs tomorrow as I'm starting a new job.
R