Yes, the seven stage Tour of Watopia on #Zwift has kicked off and I really got into this evening. I felt heavy legged to begin with. I've not given myself enough rest - and I can't bring myself to do so for fear that the curse of the sofa will strike again - yes, it's a real curse.

So anyway, it was a good field with over 3000 of us riding and to begin with I was outside the top 2000. By half way I'd only nudged up towards the top 1900 but from there I really got into... As can be seen in the charts, my power (yellow) gradually trended upwards.

By halfway things had splintered into smallish groups and I really forced it from the front to get the group speed up in order to bridge to the next group. We took in group after group as we moved up through the 1800s, the 1700s and into the 1600s. Into the final seven or eight minutes I was maintaining beyond FTP and feeling the burn to finish circa 1540. The middle graph highlights where I went into the red - and shows how steady the effort was in the first half.

I really enjoyed it tonight. The official events are great fun - and highly motivating. Bring on the next one... 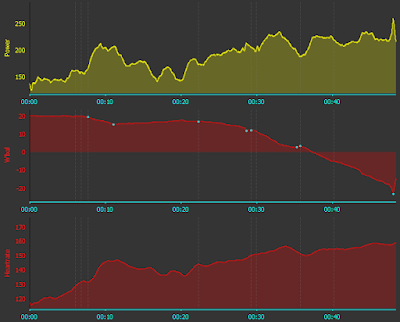