Well my legs are trashed - as, in fact, are my sholders and upper arms! All that scrambling, dropping down off the lower Snowdon ridge to Nant Peris, I guess. There was a fair amount of lowering myself down, holding on with my arms and then letting go to drop down a couple of metres to what appeared firm ground. I don't think I can remember a time I've heard the cheers of people at the check point echoing across the valley as they watched my antics. Backing that up, on arrival at said checkpoint, I also can't remember a time I've received a hug  from a young lady in recognition of such mad descending.

Anyway, back to the start. Having arrived the night before and managing some reasonably kip, in between being woken by the thunderous rain drumming on the roof of my van, I headed to the start car park around 4am. Then it was a case of working out what kit to take. I decided to start in my pertex jacket and take my gortex in my rucksack just in case things went pear-shaped. Kit packed, we set off at 5am amidst a frenzy of midges feasting. 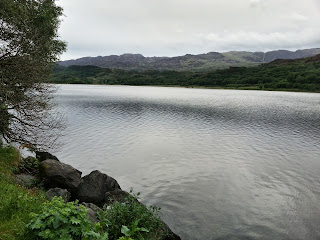 
It was a steady, gentle ascent to begin with before turning steeper and me walking. I knew I had to be on my best behaviour in order to get round. My plan was to walk when I needed to, to conserve my reserves, run when I could and try my best to get the balance right. There was a slight nav cock-up on the way to Bwlch Main. I merrily - I say merrily but there wasn't really much merriment amidst the drizzle - followed the runners ahead - school boy - but it wasn't too bad. I knew where I needed to be and could just make it out through the mist and rain. A quick cut across open grassland and I was back on track. No harm done. From there on I cut my own path.

I think the climb up Bwlch Main would be nice in good weather. There would be some good views to be had - but not with visibility down to 50 metres. Surprisingly it was soon over, as the Snowdon cafe came into view - at 6am, it wasn't open. I did a loop of the summit before deciding there wasn't a marshal present and headed down to Ugain. Half way down a marshal popped out - ooh, matron - to take my number, which was a bit of a relief because I didn't want to get myself DQ'd.

Not much to say about Ugain. With the weather poor and the gusts strong, the organiser had taken the call to switch to the bad weather route. That meant following the tourist path for a few minutes before keeping straight on where it turns under the train track. I don't think I managed to find the intended descent route as what confronted me was steep, slippy and rocky but after descending 50 metres already I wasn't going back up and you know I made it down. I was over the first section in just under two and a half hours, which was about my schedule. I was pleased with my choice to go with the pertex jacket. It was wet through but did the job of keeping the wind out perfectly.

After a few minutes at the food station check point to consume some food and take stock, it was time to head to the Elidir Fawr climb. On and on - and on. A grassy, hell  climb, of around 800 metres straight. I was with a few other runners at that stage and we chatted a little to break to monotony. With Elidir Fawr finally ascended the route over Y Garn, the Glyders and Tryfan was all very standard. The rain had stopped and the mist thinned. I think I almost saw the sun. I descended Tryfan on the west corridor as required but cut north down the steep scree field to gain a few places. In all I picked up five places on that section but I was drifting off my schedule, taking 3:15, fifteen minutes behind - he shoots, it goes out for a throw-in.

It was on the climb to Pen y Ole Wen that I knew I was in trouble. I struggled. One foot in front of the other, small steps. It seemed to take for ever to reach the marshal atop the summit. With the wind still blowing strong I found a sheltered spot just off the summit and sat down to absorb some food while not on the run. I was passed by a couple of runners but I knew I needed to regroup.

After about five minutes I got back up and carried on. I didn't feel much better but I wasn't about to not finish a race and break my career record of finishing every race I've ever started. I ran the gentle descents. The steeper stuff was too much on my legs. I walked the ascent to Carnedd Dafydd but managed to run quite a bit of the descent. The contouring towards Yr Elen went really well. In fact I ran the perfect contour to reach the coll between Yr Elen and Llewelyn bang on the low point. That raised my spirits as I'd closed the gap on the those two runners that had come past while I was sat eating my pik-nick back on Pen y Ole Wen. They had been out of sight. The weather had also improved. It was still blowing a gale but the sun was daring to show itself from behind the cloud.

From there I think my bad spell was broken and once reaching Llewelyn most of the ascent was behind me. I won't claim to have run fast over the closing miles, over Foel Grach, Gwenllian, Foel-fras, Drum and then down the road to the finish but I did manage to run quite a lot of it. The final sting in the tale was the last kilometre down the road. Steep? It was killer downhill. Thud, thud, thud. It was destroying my legs and I took it real slow. I was praying no one would sneak up on me and overtake as I honestly wasn't sure if I would be able to pick it up and run. I kept looking behind. Ahhhhh, with what must have been 500m to go a couple appeared 50 metres back - and yep, I could run. Instinct kicked in and I bolted. Legs screaming, I wasn't about to give up my place cheaply. I finally got to the finish in 10 hours and 49 minutes. About 49 minutes slower than my schedule but all in all I can't grumble. It's been the longest, toughest challenge I've tried for a few years.

Well done to the vegan runner organisers and marshals - I'm not really sure of their official club, status, etc. Everything seemed to go off okay and the food at the finish was most welcome. 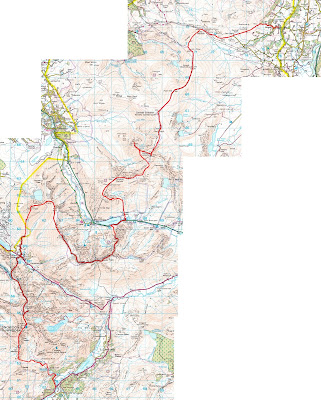