Well I had a damn good day working on Vera. Too damn good in fact. I started at nine and unfortunately worked right on through to the end of the days light just before five. The dew was beginning to form on my tools so I thought I better call it a day - plus I wanted to get across to the night orienteering. Now I say unfortunately because when I checked up on the orienteering to see what time I needed to head over to Ledbury I realised I was too late. I thought night event meant sort of evening at least. Apparently not. It's actually half past five! What the hell is that all about? Well it's my mistake. I suppose I should have checked earlier - possibly even yesterday - but still, you would of thought it was happening later than that... Instead I did a Flaxley loop of 9km with my head torch. Not too bad a session.

As to the work on Vera I managed to tint up the read window. It isn't perfect - applying that stuff is damned difficult - but it's passable and worst comes to the worst I've got enough tint left for another four attempts. With the tinting done I got down on the floor. I put down the rest of the battens and then started about cutting the front section of the ply sheet. Cue lots and lots of measuring. And lots and lots more. Measure twice cut once. Having said that and I measured more than twice in most cases but still managed to get it wrong - doh. Luckily for me it was the cut-out around the wheel arch on the passenger side and unbeknownst to me the passenger wheel arch is twenty mill shorter the the other side. That meant a quick fix to cut an extra 20mm out of the driver side - sorted.

Then I needed to make sure the front seats were still able to fold back - which you do need to do for access to the engine on the cookily designed vanette - that Vera, she's a odd 'un. I decided there wasn't an easy way to meaure this ahead of the detailed shaping for the wheel arches so with the floor in place I folded the seats back and decided I needed to trim about 20mm off the front edge. 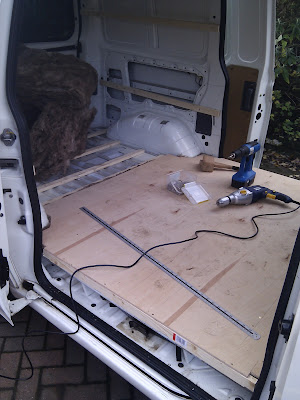 Then it was on to the back section and more measuring. The back section was easier and with no folding seats to take into account I was able to cut the ply to size in one go. More insulating and finally a bit more screwing - ooh, matron. Job done. All in all a good days work. I only wish I had checked the race time though but having said that it would have meant packing up before the flooring was complete and I must say it was quite satisfying to have that bit in the bag - and more importantly to a decent standard - and by decent standard I mean the floor fits, it's flat and there's no big gaps anywhere. 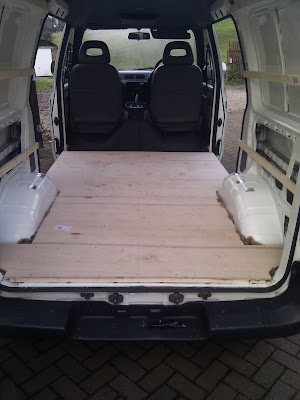 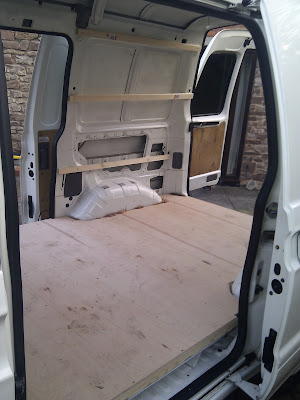 A view to the tinted rear window

Tomorrow I'm going to attempt the walls. If I can nail them - or more accurately screw them - no, ssh - with full insulation then the pace can slow because it's onto the funiture which will be batten work and that means it will be easier to do a little at a time. I'll be really chuffed if I can get the walls up tomorrow but not too disappointed if I don't...