A grand day out

What fantastic weather. It was like the middle of summer - and knowing our summers of late, probably a damn sight better.

We had to leave poor George at home on account of the fact his MOT ran out years ago, his tyres are worn and the engines been round the clock more than once. Still, as they say in the trade, he's been there, done that and has a right to his retirement from active duty. New boy on the block, Ernie (fastest sight hound in the west), more than held his own against Brown Dog and left Pedwar standing. Not bad for a dog that's done little more than lope around in someone's house for most of his life and has never been near a hill, let alone a mountain.

I couldn't quite hold my own and after the last big down and up from Pen-y-Fan down to the valley below and backup up to Cribyn I was knackered. All hope of warp speed was lost and even the impulse engines only just held together. Suffice to say I had to take a slight shortcut. At 11 miles and over 3,000 feet of ascent it was my longest - and hardest - run of the year. I am thoroughly knackered now and almost in need of resuscitation. Should have done me some good I hope and at least I managed to get in that 'final long run' before the Hilly Half next weekend. 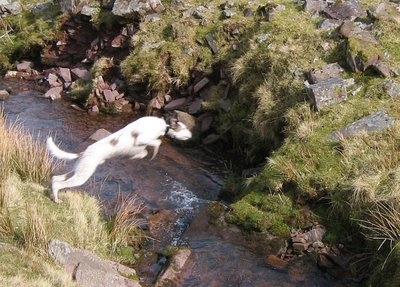