Roman around the countryside

After reaching my target yesterday I felt a bit empty today. So what does someone who's run twenty races this year do? - put their feet up and relax after a job well done. What does the Mad Runner do? Why, goes and runs his twenty first race of the year of course......

First off I managed to get to Chedworth in plenty of time this week - now that had to be a good omen. I'd looked over the results from the last few years before hand and decided that a time of 1:10 would be a good target. On last years entry I reckoned I could maybe touch the top ten.

Anyway, it was really blowing on top and it looked like the entire course was quite exposed but I still thought the 70 minute target was do-able. The race wasn't flat but at only 900ft of climb it wasn't too bad and didn't give me too many worries. I didn't bring the cap-cam today because I was going to be racing this one full on!

I couldn't be arsed with a warm up as it was chilly in the wind and I felt a bit namby pamby today - that's the attitude. So I sat in my car until five minutes to go and then walked to the start. I figured I could use the first mile on the road as my warm up.

On the dot of 10:30 the hooter sounded, breaking the silence of expectation that had been building. We were off. I was happy to let the first thirty or forty runners edge away from me while I tried to spy the 'amateurs' amongst them who would be my first targets to track and crack. I got into my rhythm after about ten minutes and started working my way through the field.

The river crossing was slightly deeper than I was expecting. I'd been told to expect it but I didn't think it would come up over the knees! The major climb soon followed, at about the seven mile point, and it was tough but I stuck to the task and picked up several places on the way up. By the top I was puffing a bit but with only two miles to go I just hung on in there until it was over.

Thought for the day: It is much easier to be critical than to be correct. 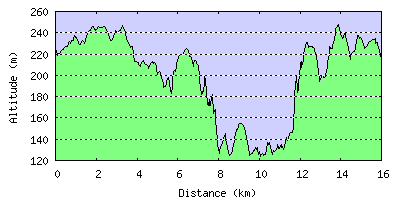