I did downgrade to the short course today. I had too. My legs were shot - as I hobbled around the camp site like a cripple. Having said that, after detailed analysis back at my personal command centre and hub of all things geek, 15 miles today wasn't exactly short!

So I set out up the footpath and out onto the mountain. Were yesterday I ran this bit, today I couldn't. The route to control one was a bit of a no brainer and I followed the path. There was more direct route to pick up the path sooner but it was steep and rough and I just couldn't face it.

I did manage to run quite a bit of the path though before finally reaching control one. From there things got rougher. The slog to two was a long one over rough ground apart from one little path I found. I was quite efficient with my lines and found it quite quickly. The route to three was equally obvious and I followed the skyline path before dropping down the steep gully path and a contouring path around Fan Brecheiniog to the sheep fold.

I should mention that the day was a scorcher and I am feeling a little bit sunburnt right now but I kept myself pretty hydrated which helped stave off too much tiredness - at least at that point. Control four was a little iffy. I found it okay but it was by a cairn not the northern boulder of a pair that it should have been. To be fair, I think the map is wrong. The boulders are drawn further away from the stream and path when in reality they are practically on the path.

After a bit of dithering over the route choice to five I finally decided to make the climb back up to the top ridge and cover the rough ground on a gradually descending line. It was rough but I managed to run some of it.

I found five okay and in short order ticked off six and seven before missing eight. I knew I was close but by then I was just edging towards tiredness induced sense of humour failure and rather than faff around up and down the gully trying to locate the re-entrant - I was pretty certain I was in the right gully - I called it a day and headed home in a time of 3 hours and 50 minutes.

It's been a tough weekend but one of thoroughly good training. The 'as accurate as I can determine them' stats for the two days are; Day One 21.5miles and 4,250ft ascent, Day Two 15miles and 3,250ft ascent. I'm pleased with that. I feel thoroughly knackered now but the fact I can still push myself around good distance on really rough terrain is pretty satisfying.

A BIG thank you to the RogueRuns team for organising what I hope will become a fixture in the calendar. Everything went off smoothly it's just a shame a few more didn't turn up and give it a go. So SPREAD THE WORD.

My routes for those interested are shown below, Day one light blue, Day 2 dark blue; 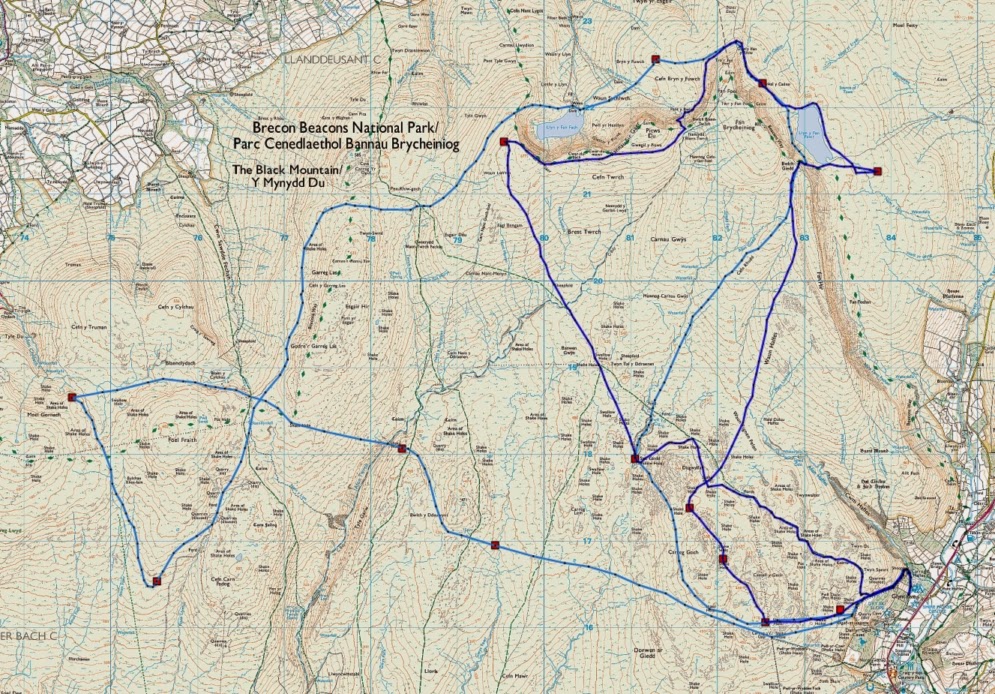